Who is the Bigger Official Lender in Africa: China or the World Bank?

Who is the Bigger Official Lender in Africa: China or the World Bank?

20 May 2021 -- In an oft-cited 2019 working paper titled “China’s Overseas Lending,” we read that China has become the world’s “largest official creditor, easily surpassing the IMF or the World Bank…” Is this true in Africa (All references to Africa in this article refer to all of Africa, including North Africa, rather than only sub-Saharan Africa)? It depends on how you define “official”. Available evidence shows that while credits from all Chinese financiers, including commercial banks and corporations, to African governments and state-owned enterprises, exceed those of the World Bank, the World Bank is still the largest official creditor in Africa.

The World Bank confirms that China is the world’s largest bilateral officialcreditor, meaning that it is the largest single creditor country. The Paris Club group of bilateral lenders comprising mostly developed countries from the global North were once large bilateral lenders in Africa, but by 2017 debt to the Paris Club amounted to less than 5% of external debt in Africa. Other bilateral lenders include Russia, India and Turkey, but their overseas lending programs are smaller than China’s. 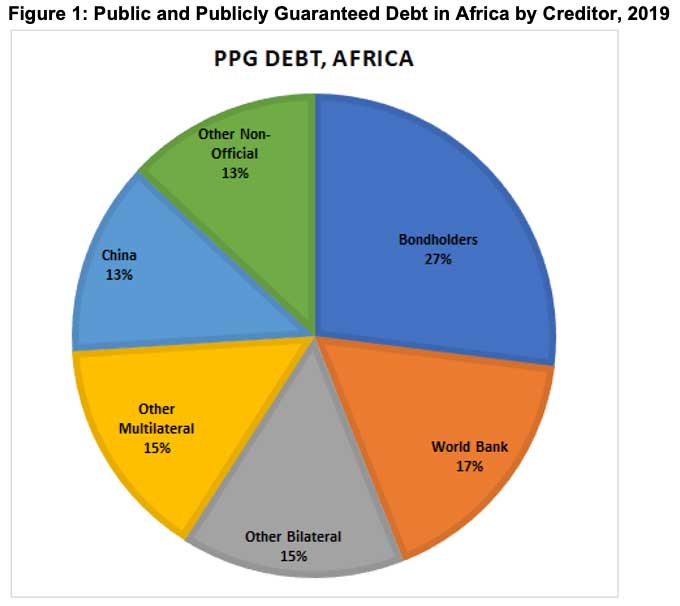 While bondholders are the largest debt holders in Africa, they are not considered official lenders. The OECD describes official lenders as “international organisations, governments and government agencies including official monetary institutions.” Commercial lenders, even if state-owned, are considered to be private lenders by the World Bank’s Debtor Reporting Manual, and are included as “non-official” lenders in the World Bank’s International Debt Statistics.

All lending from the World Bank to African governments is official, but China’s overseas lending is more complicated. The China-Africa Research Initiative’s Chinese Loans to Africa database records over 30 Chinese lenders involved in lending to Africa. Only three of these lend overseas with official policy mandates from the government of China: The Export-Import Bank of China (China Eximbank), China Development Bank (CDB) and the China International Development Cooperation Agency (CIDCA).

Data on loan commitments from the World Bank International Debt Statistics (WBIDS) and the China-Africa Research Initiative (CARI) Chinese Loans to Africa database allows us to compare China and the World Bank’s lending commitments in Africa. The WBIDS tracks the public and publicly guaranteed (PPG) debt of 120 low and middle income countries through the Debtor Reporting System (DRS). CARI tracks loan commitments to African governments and state-owned enterprises from all mainland Chinese financiers.

Overall, the WBIDS includes US$ 150 billion from the World Bank between 2000 and 2019. In Africa, the WBIDS excludes data on 6 countries: Equatorial Guinea, Libya, Mauritius, Namibia, Seychelles, and South Sudan. The World Bank’s Projects & Operations database provides data on the 6 missing countries, increasing the total for the World Bank to US$ 151 billion.

The CARI database tracks US$ 125 billion from official Chinese creditors–China Eximbank, CDB and CIDCA–to African governments and state-owned enterprises from 2000 to 2019. This figure falls far short of the World Bank’s US$ 151 billion. However, Chinese commercial banks, such as the Industrial and Commercial Bank of China (ICBC) and the Bank of China (BOC), and Chinese companies, such as Sinohydro and Huawei, also lend in Africa. The CARI database tracks US$ 27 billion from these non-official creditors, bringing the total loan commitments from all Chinese creditors to US$ 152 billion, just exceeding the World Bank’s US$ 151 billion (Figure 2). 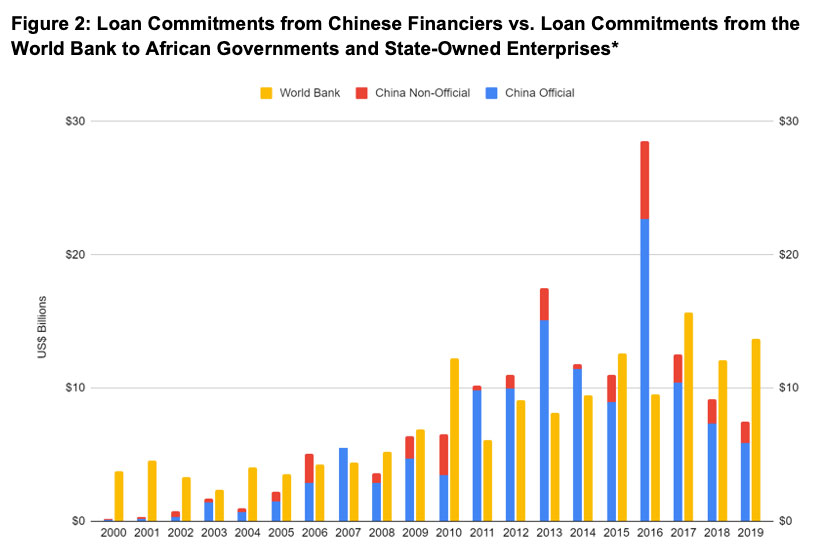 So far this analysis has excluded regional borrowers, such as consortiums of African governments and regional banks owned by African governments, such as the Export-Import Bank of Africa or the Banque Ouest Africaine de Developpement (BOAD). The WBPO database includes at least US$ 8 billion in loan commitments from the World Bank to African regional entities from 2000-2019, bringing the total from the World Bank to US$ 159 billion. The CARI database estimates US$ 2 billion in Chinese loan commitments to African regional entities, bringing the total to US$ 154 billion.

In the 21st century, China is the only country whose financiers have lent at levels that rival credits from the World Bank, which is remarkable. But China is not the largest official lender in Africa, according to World Bank definitions. Figure 1 shows that over the three years between 2017 and 2019, credits from both official and non-official Chinese financiers have fallen below credits from the World Bank. This trend is likely to continue as the COVID-19 crisis and debt distress in Africa continue to put downward pressure on lending from Chinese banks.

Kevin Acker is the research manager at the China-Africa Research Initiative at the Johns Hopkins University School of Advanced International Studies.